You’re flipping through Uncle Henry’s. You’re scanning craigslist. It’s clear that you’re searching for something. Then you stumble onto a vintage pickup truck and your heart skips. The color is right, the interior is in pretty good shape, low miles, one owner, your heart skips again. But wait, is this a wise purchase? Should you buy an old truck?

You’re no rookie. Like the truck you’ve been around awhile, so you know that sometimes when dreams come true they’re actually a nightmare. That is to say, the way something presents itself in your imagination can be very different from reality. That being said, just LOOK at this thing. 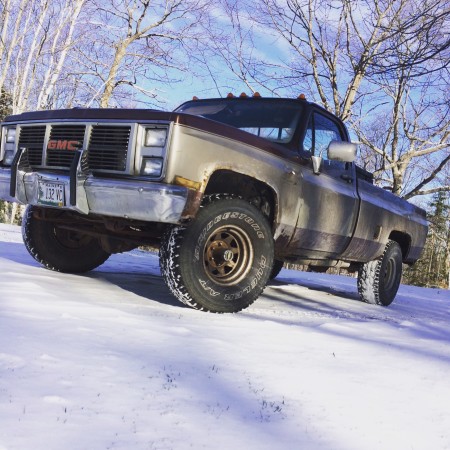 The styling had style. Unlike the rounded edges and wavy lines of today’s trucks, the older models announced their presence with authority, protruding down the road and apologizing for nothing. Mileage? Listen, if you don’t want to burn gas don’t get a truck, or a vehicle for that matter. Let’s not pretend like we’re saving the planet here with ugly aerodynamics, catalytic converters, and oxygen sensors.

Ugh, what is with all these sensors, computers, and electronic gizmos on vehicles anyway? Whatever happened to Internal Combustion America? The engine purred, the carburetor breathed, and the heart beat. Now that heartbeat is faint, hard to hear over the check engine light.

And hey what about an EMP-bomb? You know, an electromagnetic pulse? When that baby goes off and kills all computers, it might cripple society, but you’ll still be ridin’ dirty with your naturally aspirated engine. I don’t know where you’ll want to drive to in the apocalyptic wasteland that is inevitable when all the computers crash (?), but that old truck will get you there.

This truck is going to be so useful. You need transportation, especially in winter weather, not to mention all the firewood and other stuff you can load in the back. Just you and your dog cruising the back roads like your ancestors before you. Righteous.

Also, let’s cut the fat-cat bankers out of this deal entirely by buying a vehicle outright with cash money. Who needs a big payment book and all that interest? That’s money that can, and will, be spent on parts and labor.

Ok, I can see where you’re going with this and I think you’re making a smart decision. So let’s get ready for your new (old) truck with this handy checklist.

1.Do you know a mechanic who will actually work on something this old?

2. Where are all the auto parts stores near your house and which one is opened the latest?

3. Which auto parts stores near your house are open on major holidays?

Yes, there will be some tinkering involved, maintenance, and upkeep. And of course, there will be some detractors. These people will subtly and indirectly question your decision by saying things like “You cannot park that here!” or “Why did you buy that?” Pay them no mind, they don’t “get it.”

For those who do, however, you’ll be a hero. They will be impressed at every turn. Expect an emotional response. Your true friends will happily ride with you in your old truck because it’s cool, the radio works, and they need your help moving a couch.

So, should you buy an old truck? Hell yeah you should! And it just so happens I have the perfect one for you. Low miles, one owner…

Hunter lives in Bangor with his wife and two kids. He works as a Christmas tree farmer and enjoys being outside...most of the time. Originally from Dixmont, he is a UMaine graduate, Red Sox fan, and Scorpio. Although sometimes restless, he is never bored.

5 Ways to Get Your Home Ready for Summer

This blog has been archived

This blog has been archived and is no longer being updated.